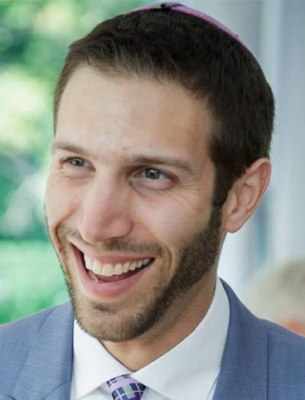 The book of Leviticus takes place entirely in the midst of wandering in the desert. It would’ve been very easy for the Israelites to say “Ah. This time in the desert is an outlier. A blip. We’re not going to experience anything like it again. So we’ll make it through, and then we’ll get back to worshiping God in the ways we always have.” But that’s not what they do in Leviticus. Instead, Leviticus is an ambitious (and imperfect) project largely geared toward creating an entirely new foundation for Israelite society moving forward — in the desert and long afterward. How might we learn from this in our own moment, as we ourselves face moments of change that could be perceived by some as “blips,” but may serve the creation of entirely new forms of Judaism in the future? Lex Rofeberg will speak to that question in a D’var Torah on April 23rd, and in an exploration of text on April 29th.
Lex Rofeberg is a Jewish educator and activist who works for the Institute for the Next Jewish Future. He is the co-host of its Judaism Unbound podcast and facilitates many of its livestreaming programs, through a project called jewishLIVE. Lex graduated from Brown University with a degree in Judaic Studies and was recently ordained as a rabbi through ALEPH ordination programs. He also has a certificate in Interfaith Families Jewish Engagement from Hebrew College. He serves in advisory capacities for Evolve: Groundbreaking Jewish Conversations, Mitzvah Matzos, Tikkun Olam Productions, and Bayit: Building Jewish, and has participated in Jewish activist movements through organizations including Never Again Action, IfNotNow, and Judaism On Our Own Terms. A native of Milwaukee, Wisconsin, Lex lives on Narragansett land in Providence, Rhode Island.
Registration is required for non-Members only; you may purchase tickets here